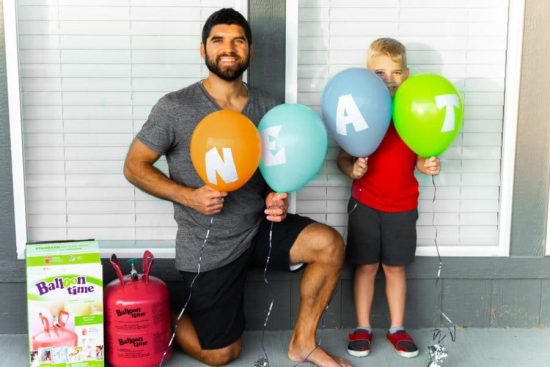 I did a quick walk through the house to get some ideas and noticed that I had several, Balloon Time  Helium Tanks sitting in my garage. Somehow I forgot that I had one in the garage and bought another one.  I always have at least one sitting around. We’re always using balloons around here, whether it be for birthday party games, minute-to-win-it games, or just to play keep the balloon in the air. And when you have lots of balloons, it only makes sense to have helium to go along with them! 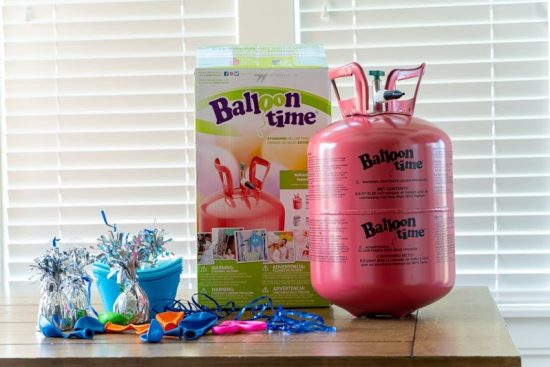 These all use things I know we always have around the house, so I’m guessing you do too. And if you don’t have a Balloon Time helium tank at home, I recommend you get one or two. Helium balloons make everything from parties to Mondays just a bit more fun. 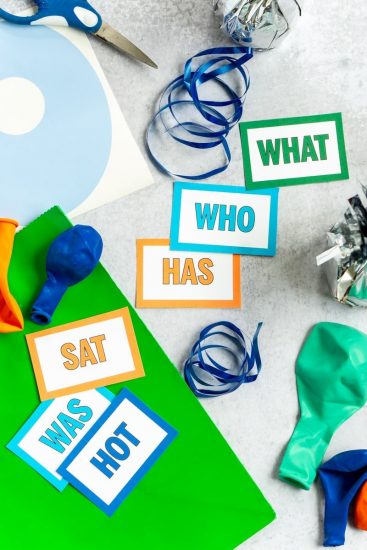 All of these games require the same amount of setup, and that’s very little. Since you’ll be using helium in the balloons and helium doesn’t last forever, I recommend blowing up the balloons maybe an hour before you’re going to play. This would be the perfect thing to do right before school pickup! 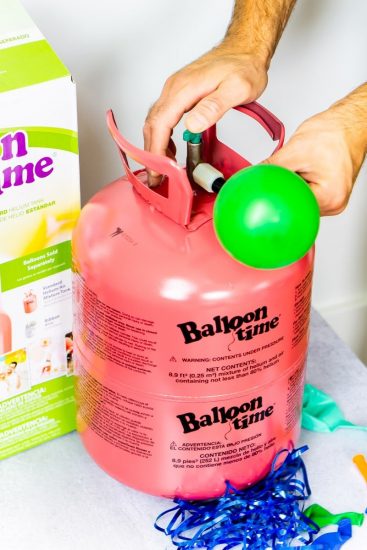 Here’s all you need to do to get ready to play. 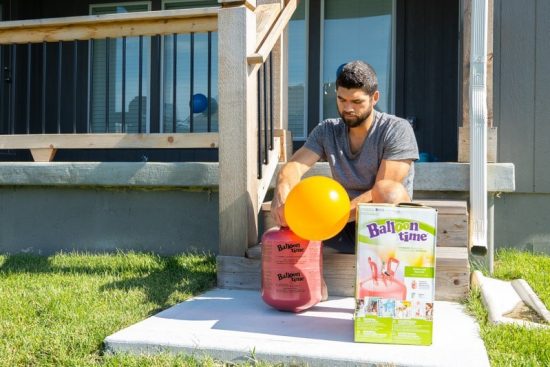 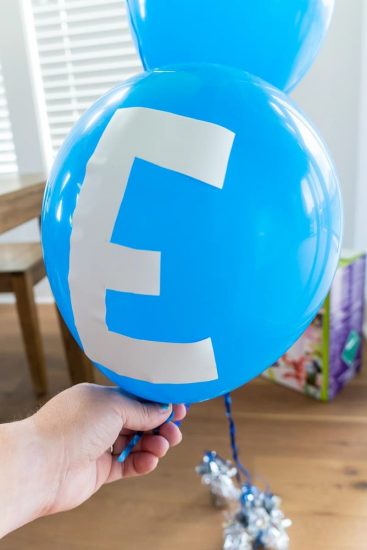 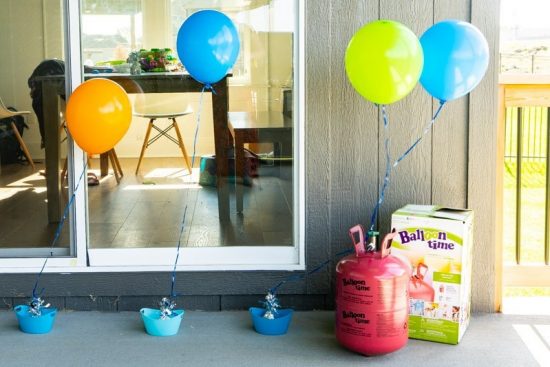 This is one of the games shown in the video and one of the easiest. Simply pick out a card from the bag and yell it out for the kids to hear. 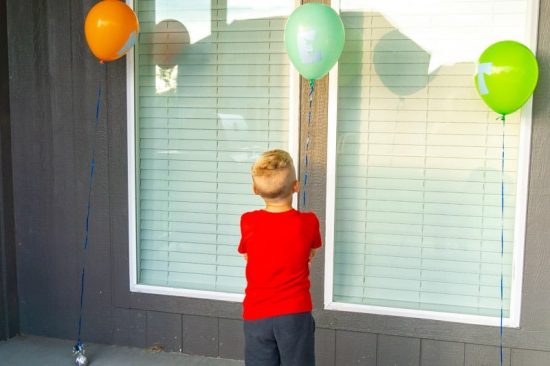 For this game, put out like five different letter balloons (a mix of consonants and vowels) and see how many different words kids can make out of the balloons. Just like the game above, they should grab the balloons and bring them to the other side of the room, yell out the word, then take them back.

Want to make it even more active? Run across the yard between every word. This would make a great relay, too!

The goal is to spell as many words as possible out of the letter balloons they have available. Keep track of how many words they spelled and see if they can beat their record with the next set of letters.

3 – Time for a Replacement

In this game, you start off the game by spelling out a word with the balloons. Put the word in the buckets at the end of the room.

For example, if the original word was hot, they could replace O with A to make hat. Or they could add S to the beginning to make the word shot.

See how many new words you can make with just one replacement. 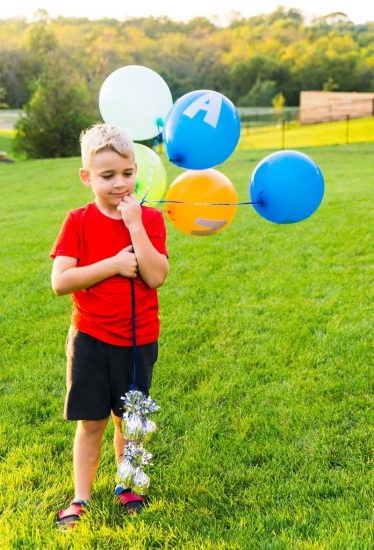 This opposites game is about helping kids to understand how to spell words and know what they mean. It’s one of my favorite spelling games for that reason.

It works just like the how do you spell game except you are going to call out the opposite of what you want the kids to spell. So if you want them to actually spell hot, you’d say cold. They have to think about what the opposite would be and spell the opposite.

Thinking, spelling, and comprehending. All good for things for elementary schoolers!

Last but not least, this game focuses more on reading and sight words than spelling—but it’s still a fun one! Just like in the time for a replacement game above, in this game, you should make a word with the balloons while the kids aren’t looking.

When you say go, they need to go over to the balloon, read the word (say it out loud!), then head over to the table of words to find the correct word.

Since they aren’t spelling the words in this game, you could make these words a little tougher, but still age-appropriate.

If you’re looking for spelling games for a large group of kids or an entire classroom, these are for you! These games really only work with a big group of kids because you’ll want to have quite a few letter options.

For these games, you’ll want to give every kid playing a different letter balloon. If you have more than 26 in the group, give out some extra Ts, Ns, Rs, and vowels. You know, those letters you get for free in popular phrase-solving game shows.

I also recommend a Balloon Time Jumbo Helium Tank because filling up that many balloons calls for a little more helium, and the jumbo tank fills up to 50, 9″ latex balloons or 27, 11″ latex balloons! 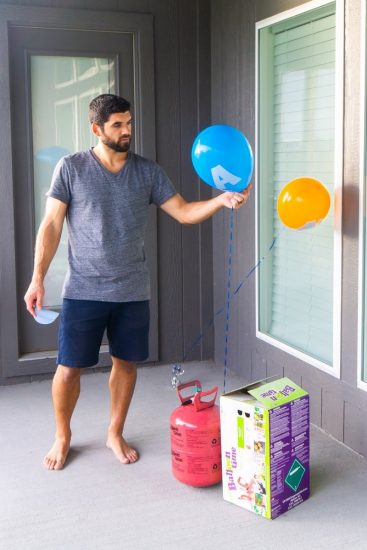 Red rover, red rover—send an E over. This spelling game is red rover with a spelling twist. Each kid should tie a balloon to somewhere on their clothing so the balloons are hanging above them.

When you say red rover, red rover send a “letter” over, that letter has to run to the other side and try to find a place in the other line where their letter will either:

If they can find a place in the line where they can do that, they run to that location in the line (not trying to break through, just going and tagging hands with the other team) and then get to take their choice of player back with them. If they can’t find a place, they join the new team.

Split into two groups, making sure to divide the vowels and consonants across both teams. When you say go, teams must work together to try and form the longest word they can using only the letters they have on their balloons.

Once they have their word, stand together in a line showing your word. 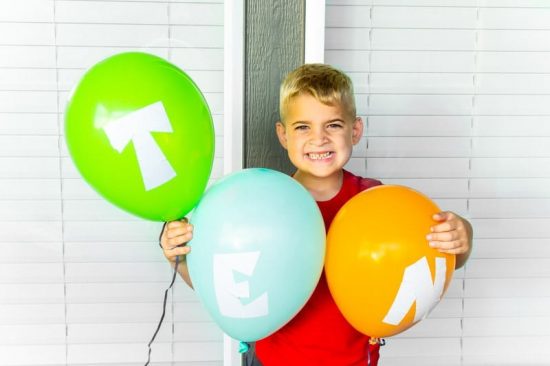 The idea is that like in a spelling bee where words tend to get longer and harder as the spelling bee goes on, the number of letters in the words you’ll be spelling increases as you keep playing.

Here’s how it works:

Everyone should get their own balloon with a letter on it but instead of just doing all of the letters of the alphabet, I recommend doing half consonants and half vowels so there are a lot of vowels out there and available. I would also stick with popular consonants, not letters like Z, X, and Q.

Start by yelling out three. Everyone has to search around the room and find two other people that they can join together to make a three-letter word. If anyone can’t find someone, they’re out of the round.

Once everyone has found their trio for the three-letter word, yell out four. Everyone then has to find a group to make a four-letter word. Same rule applies: can’t find a word, they’re out.

Go up to five and do the same thing. If you have enough people, you can do six and seven as well.

Instead of going in sequential order (3, 4, 5, 6, 7) you could always mix it up as well and start with four, go down to three, go up to five, etc. so people don’t know what’s coming and can’t plan ahead. Keep playing until you only have one group of three people left. 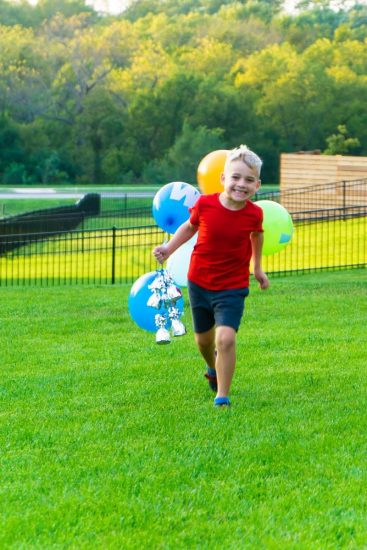 You’ve heard of blob tag, right? Or maybe you haven’t heard it called that, but it’s a popular one. The idea is that when someone gets tagged, they become part of the blob and have to stay with the person who is it and try to tag people together.

Because we’re talking spelling games, this is called spelling tag. Give everyone a balloon – same as the spelling bee game above, I recommend doing a lot of vowels and popular consonants.

Pick one person to be it and have that person stand in the middle. When you say go, that person has to try and tag someone else but the key is that they can only tag someone that would start spelling a word. That person then becomes part of the it team.

The first person is easy. After that, you have to be careful about who you tag because you can only tag someone who would create a word.

So for instance, if the first person who was it was the letter T and they tagged H – they could tag quite a few letters but they couldn’t tag someone like G or P because THG and THP don’t spell, and can’t spell, anything.

Try to keep going and tagging as many people as you can to build the longest word possible. Once there are no more letters left to be tagged that would make a word, pick someone else to be it.

Want to make it easier for the person who is it? Give people multiple balloons – one with a vowel and one with a consonant. Or put two letters on one balloon so they have more options for people to tag. 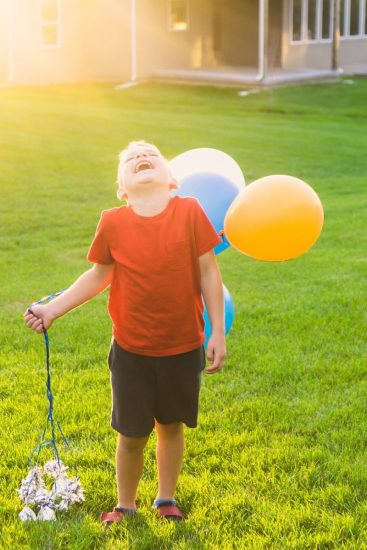 Just a few notes for making sure that these games are fun and as easy to play as possible for people. 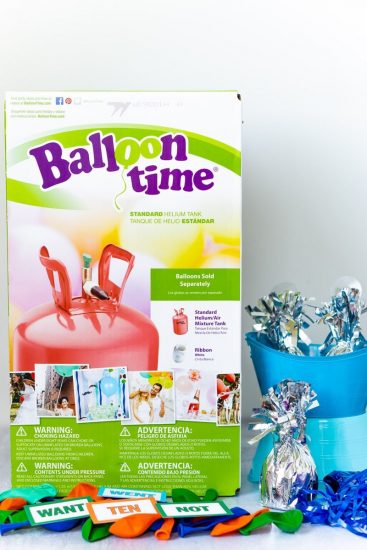 Note: Adult supervision is required when using balloons. Please read all warnings and precautions on the Balloon Time carton. 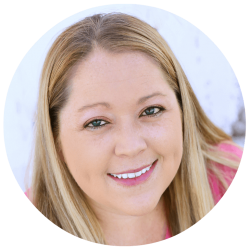 I'm Britni, the creator of Play Party Plan. I live in the Kansas City area with my two boys and an amazing husband who supports this crazy job of mine. I truly believe that all the best things in life are related to one of three things - food, family, or fun. Or at least those are the things I remember most!

When I'm not working or spending time with family, you can find me curled up with a good book and a bag of chocolate-covered cinnamon bears or at the local movie theater with a bottomless Icee and bowl of popcorn. Or finding fun things to do somewhere around the world! In the past year alone, we visited Grand Cayman, Australia, Amsterdam, Croatia, Switzerland, Greece, and various places throughout the United States.

I created Play Party Plan on a whim after my first son was born in 2013 because I couldn't find fun party game ideas for a party I was hosting. I had no idea that little whim would just a few years later be a website with over a million visitors a month. I guess other people were looking for party games too!

How to use
our tanks

Find a retailer
near you

Save $2 with
this coupon